Funny after you do genealogy for a while, that so many people feel they own their ancestors. Locked trees, not sharing information; really? Over the years I’ve tried to understand this concept and at one point had my tree private and then over time I realized that it’s through collaboration that you gain so much.  I’ve received and given records to cousins from far away and I especially like it when I get photos of my family that I was previously unaware of . So my main tree is open for all to see. After all they are my family but they are also someone else’s family and so I’m happy to share. 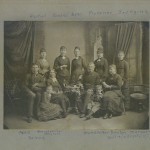 It was just over a year ago that I started to believe that I don’t own my ancestors but that they own me. Why do I say that? How many times have you been dead tired but stay up into the late hours because some nagging little voice makes you…. or suddenly you come across a record set that you’ve never heard of before but it provides some gem of information.  I’m not so sure that it’s all by chance or it’s your ancestors telling you;  “look over here”…

Sometimes I wonder if there is a reason that the Beaton family; particularly my great grandfather,  is so tough to find anything out about. Perhaps it’s to make me appreciate any info all the more or is someone telling me that I need to stop, perhaps I don’t want to know what the circumstances were of his and his sisters adoption.

Perhaps I’m a bit touchy about whether you own your ancestors today because I’m trying to figure out my great-grandfather’s biological family by using a mirrored tree. After adding several people I received a shaky leaf. I was so excited because this is the first shaky leaf that I’ve ever seen. So I clicked on it and it took me to my DNA match. Then the moment of truth; to see who we connect on, only to find that they have a locked down, bolted up tree. Don’t get me wrong I do understand about doing that because in fact my mirrored tree is locked down as well, but that’s because it’s just a theory not a fact and I don’t want anyone to copy a mistake. So I contacted the person and advised that I’d unlock my tree if they unlocked theirs; even if it was only for a few minutes at a designated time.  My DNA match has been on Ancestry every day since I sent that message three days ago but either is ignoring it or doesn’t notice that envelope…. So I sit and ponder what the next step will be.

Whatever it is I’ve had an open tree for several years and am happy to share any information and if you have a research tree or a mirrored tree I get why you’d want to lock it down or title it  by a name that shows that it might have errors. Beaton Family Tree (not completely substantiated)… but the worst thing I think you can do is have someone contact you; that loves genealogy as much as you do and not a least have the courtesy to reply to an email.

Now I’ll step down from my soapbox.