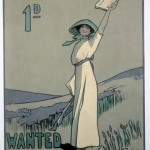 In the U.S. in 1988,  March was proclaimed Women’s History Month and if you’re from Canada like I am;  it was proclaimed a few years later in 1992. The idea behind Women’s History month is to provide us with an opportunity to learn about the important contributions of women to our society and how they shaped our lives today. So who would be your heroine? The first people who come to my mind are the women who made it possible for the women of our generation to have rights, some of which we take for granted, but which  gave woman the right to vote. Perhaps one of the most recognized women’s rights activists in U.S. history was; Susan B. Anthony (1820-1906) and as for Canada it’s hard to say whether it was; Hannah Norris of Nova Scotia or Letitia Youmans of Ontario. I’m proud that “The Famous Five” or the “Valiant Five” were five women from  my home province, Alberta.  These women asked the Supreme Court of Canada the question, “Does the word ‘Persons’ in Section 24 of the British North America Act, 1867, include female persons?” The five women were, Emily Murphy, Irene Marryat Parlby, Nellie Mooney McClung, Louise Crummy McKinney and Henrietta Muir Edwards. I have a bit of a fondness for Emily Murphy as I found a court document where my great-grandfather; William Beaton was charged with failing to send his children to school and the judge was none other than Emily Murphy. Even the lady at the achieves mentioned it when I asked for a copy of the document; “Did you see who the judge was?”

All of these women were people who fought for changes in history;  but there were other women that are important, maybe not to the country,  but they certainly were important to our families and they were key players in where our families are today. 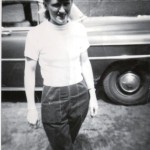 First for me; it’s my mom, Eleanor Louise Middlebrough and this past Saturday marked the one year anniversary of when she left us.  My brothers called her the iron lady because she had strong opinions and values and she did her best to instill those values in her three children. Her family was everything to her and she always put her family’s needs ahead of her own. She came from an era where the women of the house stayed at home and raised the children and my mom did that much of the time by herself as my father worked in sales and often was away in the daytime as well as the evening. My mom took pride in her home and it was always tidy and ready for guests. Later in her life I guess she decided she needed more, so she got a job in sales in the shoe department at Woolco. As with all things she did, she did it well. 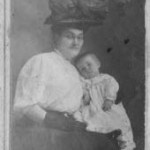 Although I never met her, the next person that I ever thought of as a hero or heroine was my great-grandmother on my paternal side; Lily Myrtle Shannon. She was 22 when her mother died but even before that,  she was already out of the house and working as a domestic. I always admired Lily because she had my grandfather; Harold out-of-wedlock and  kept him. I always thought that was quite brave as he was born in 1907 and that’s not exactly a time when women did such things. By the 1911 census her second son; Norman was one month old and she was living with her husband; John Robert Thompson and her first son; Harold. I don’t know exactly when and where she met John Robert, but according to her obituary John Robert said that they had met and married in Thornton, Ontario but I’m not sure that’s accurate.  There seems to be a bit of bother about his first wife still living in Saskatchewan, but perhaps he took care of that detail and I just haven’t found the record.

My other paternal great-grandmother was;  Alice Elizabeth Clark. She was born in Sussex, England and was only 3 when her father died. I know that event made it very difficult for her mother, because she ended up sending  her other daughter; Jessie to live with her Uncle Noah. When Alice was 23 years old she married the love of her life; Jesse Oliver. I know he was the love of her life because when she spoke of  him you could just feel the love in her words. What makes me admire her is that she came to Canada to follow Jesse but she did that 7 months after he left and only 6 short weeks after the Titanic sunk. How brave she was to travel with two small children to an unknown country after such a tragic event. But she did and I will always remember her happy disposition and her love of life.

Perhaps these women didn’t change the world but they were women that looked after their children, protected them and made a home for them and that changed my families world.