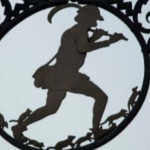 When you work on your family history you discover many events that happen in your ancestors life. Births, marriages, deaths are some of the key ones but there are other major events that shaped their lives. One of those events might be a move to another city, state or province or even immigration to another county. But the question is… why did they move? What made them move hundreds and sometimes thousands of miles? For my family it was probably the search for a better life as it was for many families.  Less than a month after his youngest daughter was born, my great-grandfather; Jesse Oliver’s, set sail for Canada.  Edmonton, Alberta to be specific, some 4,253 miles away from Brighton, England where he was born. Away from his widowed mother and other family members and leaving his wife and two small daughters behind.

Seven months later his wife;  Alice followed with the two children, after I’m sure a long train trip from Brighton to Liverpool they boarded the Empress of Ireland.   I’m sure this was scary enough but when you add the fact that the Titanic had sunk only six weeks before I can imagine that her own family tried to convince her to stay.  But she never would have stayed because years later when I would speak to her of my great-grandfather she spoke with such a love that you know staying wasn’t even an option. But why Edmonton? When I did  further research I realized that Jesse’s brother; Arthur had also gone to Edmonton and had been there since 1906. So you can imagine that he was sending letters to his brother telling him of this vast land and telling him about all the opportunities. So was he the pied piper? Maybe, but it will take more research to understand why Arthur came to Canada. He was single, so he may have had some wanderlust.. or perhaps he had someone, a friend, who came before him.

I do know that Jesse and Alice also became pied pipers,  because one year after they arrived, Alice’s sister; Jessie and her husband; Harry Brearley came with their two daughters and on it goes.

So I hope this encourages  you to search for your pied piper.