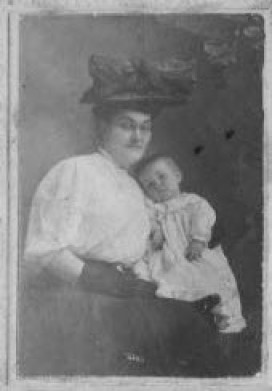 When I first started researching my family history there were ancestors that I already admired.

For instance, my great-grandmother; Lily Shannon. I admired her because as the family story went she had given birth to my grandfather; Harold out-of-wedlock and had kept him, and I think that it would have been uncommon in 1907 or at least having a child out-of-wedlock was unacceptable. My daydream was that she had him and then moved to Edmonton and pretended perhaps that she was a widow.. You know those fantasy thoughts you have.

When I was 16, I received a copy of his birth certificate from my father and when I contacted vital stats to see why his name was the same as his adopted father’s last name,  I was told that he had done a delayed birth registration and that the substantiating information had been census records. The family story had been he’d gone to a lawyer and the lawyer said; you’ve been a Thompson all your life … you don’t need to change now to your mother’s maiden name.

Now fast forward to about 15 years ago. I’m doing my research and I find a birth registration but this one was done at the time of his birth. It gives the name of his father as Godfrey Myrtle; stone mason.  Suddenly I was very angry with my great-grandmother. Why wouldn’t she have told my grandfather who his father was? After all this had been something that had bothered him all his life. Had actually affected his self-esteem as I had understood.

But after a few days you start to think about other scenarios. Perhaps his father had been a bad person and she didn’t want him to know that. Perhaps she intended on telling him when he was a man of 21, but she didn’t get a change because she had died when he was 19. Ok, maybe that’s a stretch but I wanted to give her a way out.

To this day I really don’t know what the story was. I couldn’t find a marriage to Godfrey and I’ve never really been able to find out anything more about him.  Furthermore,  when you look at my father’s Y-DNA you’ll clearly see we are Palmer’s. Perhaps we’ve had more than one non-paternal event  in that line or Lily  just made him up when they came to register the birth and didn’t want to continue with the lie.

Anyway, I’ve forgiven great-grandmother Lily. You must have had your reasons and perhaps someday I’ll know what they were.